NasoniaBase is an archive and will not be updated. The most up-to-date Nasonia genome data is now available through the navigation bar on the HGD Home page. 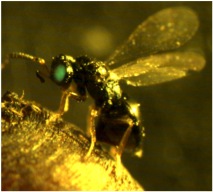 The species of Nasonia are a primary model for parasitoid genetics. The unique aspects of their natural history include large family sizes, haplodiploidy, four closely related and interfertile species, the ability to inbreed and produce healthy isogenic inbred lines, a wealth of visible and molecular markers, the ease of performing complete genome screenings in search for mutations in the haploid sex and the capacity to produce genetically identical recombinant genotypes in the F3 generation.